As Chairman of the 33rd Senate District Committee of the Republican Party, and pursuant to the Plan of Organization and
as recommended and directed by the Committee, I, Mark Sell, do hereby issue this call for a LEGISLATIVE DISTRICT
MASS MEETING to be held at Fairfax Christian School, 22870 Pacific Boulevard, Dulles, Virginia 20166 starting at
11:00 a.m. local time on Saturday, June 1, 2019, with registration beginning at 9:30 a.m. and ending at 10:30 a.m., for the
purposes of: (a) nominating a Republican candidate for the office of STATE SENATOR to be voted for in the GENERAL
election on November 5, 2019; and (b) for the transaction of such other business as may properly come before the mass
meeting.

Qualifications for Participation
All legal and qualified voters of the 33rd Senate District under the laws of the Commonwealth of Virginia, regardless of
race, religion, national origin or sex, who are in accord with the principles of the Republican Party and who, if requested,
express in open meeting either orally or in writing as may be required, their intent to support all of its nominees for public
office in the ensuing election, may participate as members of the Republican Party of Virginia in its mass meetings, party
canvasses, conventions or primaries encompassing their respective election districts.
Any delegate in the registration line or referred to the Credentials Committee by 10:30 AM will be permitted to register.
No one shall be permitted to join the line after 10:30 AM.

Filing Requirements
Candidates for the election or nomination at said mass meeting shall file a written statement by mail or in person, along
with the appropriate filing fee, to Mark Sell, Legislative District Committee Chairman, 1012 Smartts Lane,
Leesburg, VA 20176, (Ph: 703-307-9172) which must be received not later than 9:00 PM Eastern Time, Tuesday,
March 12, 2019. Postmarks shall not govern. The statement must have an original wet ink signature and include a
Statement of Qualification indicating his/her intent to support all Republican Party of Virginia nominees in the ensuing
election. A non-refundable filing fee of $700.00, payable to Loudoun County Republican Committee, must also
accompany the signed statement.
Only those candidates who have properly filed by the stated date and time with the required fee shall be considered for
nomination at the Mass Meeting; nominations from the floor will not be allowed. If only one person files then that
prefiled candidate shall be declared the Republican nominee for the 33rd Senate District, and the Mass Meeting will be
canceled.

Registration Fee
A voluntary registration fee of $25.00 is requested of each voter in this mass meeting.

Publication of Call
In accordance with Article 8, Section A2 of the Republican Party Plan of Organization the required publication in a
newspaper is waived.

Campaign Kick-off for Joe May Candidate for State Senator in VA’s 33rd District
The campaign kick-off will take place at 11:00 AM on Saturday, December 8, in the Joe May for Virginia Campaign HQ, 604 King Street, Suite 101A, Leesburg VA. 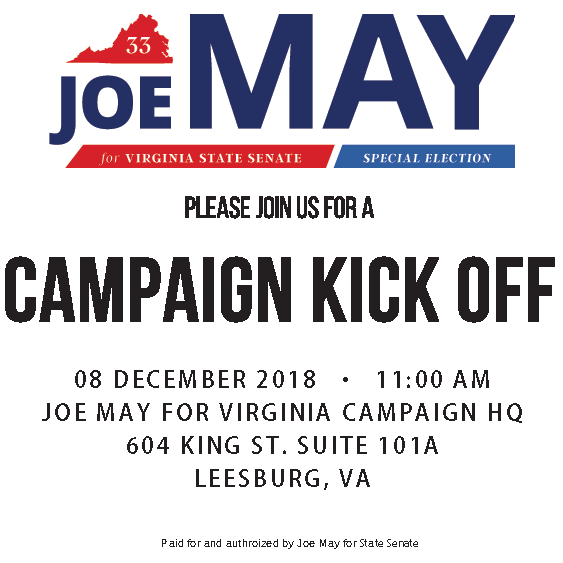